Songs on the Death of Children

German poet Friedrich Rückert’s (1788–1866) youngest children died of scarlet fever, the pandemic of his age. Over six months in 1834, he wrote hundreds of laments that were published posthumously in the classic poetry collection, Kindertotenlieder. Here in English for the first time, these evocative modern translations by a fellow bereaved father reveal “an honest grappling with grief” (The Christian Century). Each poem is accompanied by practical insight for the bereaved, along with personal anecdotes, historical and cultural information, the latest research on grief, and discussions of literary and biblical allusions.

David Bannon taught college for many years, has appeared on The Discovery Channel, A&E and The History Channel and has been interviewed by NPR, Fox News and The Wall Street Journal. He lives in Chester, South Carolina.

translated and annotated by David Bannon

• “In the wake of a profound loss, David Bannon discovered the German poet Friedrich Rückert’s compelling verses, well-known in the poet’s own time but sadly almost forgotten in our own. As he turned in his grief to Rückert’s ‘songs,’ David not only found comfort, he also felt moved to draw on his considerable skills as a translator. The task of rendering the poetry of a bereaved father into English, David found, ‘was one of communion and solace.’ Here he artfully frames Rückert’s genius and helps his searing insights come alive. The result is an account both wonderfully well-researched and yet also moving and deeply personal.”—Timothy Jones, former Dean of Trinity Episcopal Cathedral in Columbia, South Carolina, and Rector of St. John’s Episcopal Church in Halifax, Virginia

•“You will cry, but the tears will comfort you.”—Johannes Wilkes, psychologist, president of the Erlangen Rückert Circle, Germany

• “Friedrich Rückert, who had mastered thirty languages, found words for the inexpressible language of grief. More than 150 years later, his Songs on the Death of Children has new life, thanks to a vibrant new translation by David Bannon. This first English-language edition of a classic work adds commentary that illumines Rückert’s work of deep passion while also bringing wisdom and solace to everyone acquainted with grief.”—Philip Yancey, author of Where the Light Fell and What’s So Amazing About Grace?

• “David Bannon opens our eyes to the timeless, borderless, and trans-cultural nature of grief, and of hope. He brings alive the centuries-old poetry of a bereaved father, Friedrich Rückert, with powerful essays and commentary. I found myself caught up in the life of a dad from another place and time, who seems to feel everything I feel now when I think of losing my son, and was comforted and inspired to see the beauty of life as it still is, pain and all. David has done a remarkable thing with this book, and it will take up an important place in the modern canon of grief and loss. Outstanding.”—W. Lee Warren, MD, neurosurgeon, author of I’ve Seen the End of You, Winner of the Christian Book Award, and Host of The Dr. Lee Warren Podcast

• “This beautiful English translation of German poetry by Friedrich Rückert communicates a timeless message of grief, as well as comfort. David Bannon—a linguist and scholar who also shares with Rückert the broken heart of a father—provides far more than a simple translation; his commentary on the poetry, the historical times, and the original language leads readers to a deeper understanding of this fascinating text with the power to heal.”—Steven S. Bammel, Ph.D., translator

• “Bannon’s translation of Songs on the Death of Children, masterfully embedded in their original context, is a worthy contribution to the long history of profoundly moving father’s laments, to the enrichment of the genre as a whole.”—Titus Leber, director of the film Kindertotenlieder (1976).

• “The finest lament in world literature is finally available to the world in English, the international language, thanks to David Bannon’s sensible translation.”—Dr. Rudolf Kreutner, president of the Rückert Society, historian and archivist of the Rückert estate collection, and publisher of the definitive critical editions of the works of Friedrich Rückert. 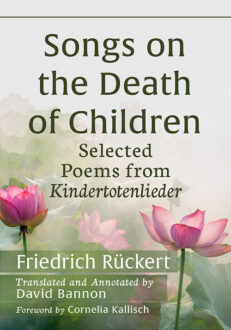 You're viewing: Songs on the Death of Children $29.95
Add to cart