The Nurse in Popular Media

The image of the nurse is ubiquitous, both in life and in popular media. One of the earliest instances of nursing and media intersecting is the Edison phonographic recording of Florence Nightingale’s voice in 1890. Since then, a parade of nurses, good, bad or otherwise, has appeared on both cinema and television screens. How do we interpret the many different types of nurses— real and fictional, lifelike and distorted, sexual and forbidding—who are so visible in the public consciousness?

This book is a comprehensive collection of unique insights from scholars across the Western world. Essays explore a diversity of nursing types that traverse popular characterizations of nurses from various time periods. The shifting roles of nurses are explored across media, including picture postcards, film, television, journalism and the collection and preservation of uniforms and memorabilia.

Marcus K. Harmes is an associate professor at the University of Southern Queensland, Toowoomba, Australia. He researches on British popular culture especially science fiction and horror.

Barbara Harmes lectures at the University of Southern Queensland, Toowoomba, Australia. Her research focuses on English literature and higher education.

Meredith A. Harmes teaches communication studies and legal history at the University of Southern Queensland, Toowoomba, Australia and has a research background in political science and British political history. 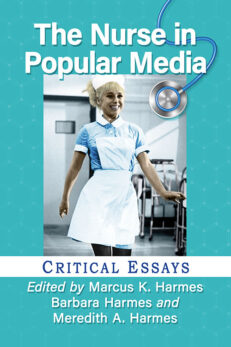 You're viewing: The Nurse in Popular Media $55.00
Add to cart