Through Thick and Thin

Pediatrician Carolyn Roy-Bornstein and her husband had a comfortably empty nest after their sons had grown and flown. Soon after, Carolyn noticed that two of her patients struggled after their father died of cancer and their mother became too mentally ill to care for them. As a result, they were both placed in foster care, where one developed a severe eating disorder and the other began self-harming.

In a leap of faith, Carolyn and her husband opened their home to these sisters and became their foster parents. Carolyn, despite being a doctor, was unprepared for the harsh realities of severe anorexia, depression and grueling treatment. She had worked as a pediatrician for the Department of Children and Families for years, but still was not equipped for the bureaucratic struggles she would face to save her youngest foster child from a brutal eating disorder. This book outlines the struggles of a fledgling foster family who, despite all odds, remains devoted to one another throughout the healing process.

Carolyn Roy-Bornstein’s work has been published in the New York Times, Boston Globe, Poets & Writers and many other places. She lives with her family on the North Shore of Boston.

Acknowledgments vi
Section I—In the Beginning
Prologue 3
One. A Loving Leap of Faith 4
Two. Where Is Home? 12
Three. Insiders 24
Four. A Relationship in Venn Diagrams 31
Five. Facing Demons 38
Six. It Takes Courage to Believe 51
Section II—In the Throes
Seven. Boarding the Struggle Bus 63
Eight. Together, Alone 72
Nine. Warding Off Demons 86
Ten. Not Enough Tears in the World 95
Eleven. The Sign 111
Twelve. This Is How I Lose Her 121
Thirteen. The Standoff 131
Fourteen Living in the Slipstream 145
Section III—In Coda
Fifteen. A Rocky Road Gets Rockier 161
Sixteen. As Close to Death as This 171
Seventeen. The Fight of Our Lives 179
Eighteen. Doubling Down on Love 186
Epilogue 190
Index 195 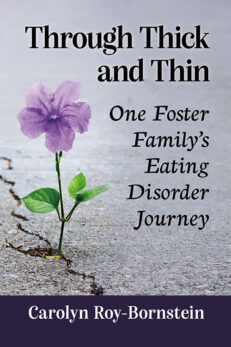 You're viewing: Through Thick and Thin $19.99
Add to cart