A Year in the Life of a “Dead” Woman

“Perhaps I should have realized that cancer runs in my family. After all, three grandparents and my father and brother perished from this disease. Yet, when I received my colorectal cancer diagnosis, I was surprised. I never expected to be primarily identified as a cancer patient. Following a typical combination of chemotherapy, radiation, surgery, and more chemo, I was presumably cancer-free when my post-treatment scans looked clean. Nonetheless, within a year I received a terminal diagnosis; cancer had metastasized in my lungs. Thus began my year as a dead woman—a time of chaotic emotions, new priorities, and rapid-fire plans and changes. Expecting the unexpected became a theme in my life, but the things that turned out to be most shocking are social, familial, and even my expectations about what is realistic for a dead woman to be or do.”

Preconceptions about a terminal cancer diagnosis frequently are based on popular culture depictions of cancer and dying, which can be misleading as a guide for knowing what to expect when you’re expecting to die. This memoir provides one woman’s often-irreverent, pop culture-illustrated guide to life that deconstructs some common preconceptions about living with a terminal diagnosis.

Lynnette Porter is a professor in the Humanities and Communication Department at Embry-Riddle Aeronautical University in Daytona Beach, Florida, and has written extensively on television and film. 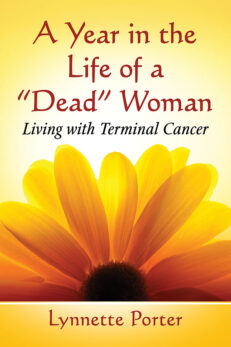