Toward a Body-Centered Understanding

Gong fu, the indigenous martial art of China, was exported into American popular culture through numerous “kung fu” movies in the 20th century. Perhaps the most renowned of the martial arts in the U.S., gong fu remains often misunderstood, perhaps because of its esoteric practices that include aspects of Daoism, Confucianism, Buddhism and other syncretic elements. Using the science of embodiment—the study of the interaction between body, mind, cognition, behavior and environment—this book explores the relationships among practitioner, praxis, spirituality, philosophy and the body in gong fu. Drawing on familiar routines, films, artifacts and art, the author connects the reader to ancient Chinese culture, philosophy, myth, shamanism and ritual.

College writing instructor R.F. Gonzalez, Ph.D., has been involved in the martial arts for several decades. He lives in Irving California, and his website is www.rfgonzalez.com.

• “In this well-researched and finely written book on one of the most esoteric and mysterious aspects of Chinese culture, R.F. Gonzalez provides a captivating account of the core of Chinese martial arts that integrates cognitive science, Chinese thought, ethnographic fieldwork, and personal practice. His book should be read not only by martial arts practitioners but also by scholars of anthropology, ethnography, folklore, Eastern thought, and scientific approaches to human potentials.”—Ming Dong Gu, PhD, author, Sinologism: An Alternative to Orientalism and Postcolonialism
• “Kung fu is a blend of ritual, spiritual practice, animism, and martial arts that holds a unique place among the world’s cultural traditions. Gonzalez brings much-needed insight into this complex and often misunderstood tradition. Chinese Gong Fu will become a cornerstone of kung fu studies.”—Thomas Riccio, professor of performance and aesthetic studies, University of Texas at Dallas
• “Chinese Gong Fu: Toward a Body-Centered Understanding is a fascinating look into both the what and the why of gong fu as well as the union of body, soul, and environment that helped the ancients bring balance to their lives and which still brings calm to gong fu practitioners today.”—Antonio Graceffo, PhD, author of The Monk from Brooklyn: An American at the Shaolin Temple 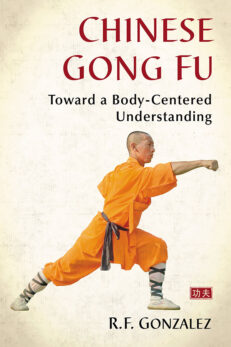