At the close of the 2010s, to many, the world appears to be in a state of dangerous change. News and fictional media alike report that these are dark times, and narratives of social resistance imbue many facets of Western culture. The chapters in this collection examine different events and themes of the 2010s that readily acknowledge the struggling state of things. Crucially, these essays look to the resistance and political activism of communities that seek to make long-reaching and institutional changes in the world through a diverse group of media texts. They scrutinize how a society relates to injustices and how individuals enact a desire for change. The authors analyze a broad range of works such as texts like: Awake: A Dream from Standing Rock, Black Panther, The Death of Stalin, Get Out, Jessica Jones, Hamilton, The Shape of Water, and Star Wars: The Last Jedi. By digging into these and other works, as well as historic events, the contributors explicate the soul-deep necessity of pushing back against injustice, whether personal or cultural.

Amanda Firestone is an assistant professor of communication at the University of Tampa. Her research focuses on the heroine’s coming-of-age in Young Adult Literature.

Leisa A. Clark is a professor of arts and humanities, teaching diverse class subjects such as art history, media studies, and film history. She is the author of a variety of books, ranging from fictional comedic space opera to critical edited collections. She lives in St. Petersburg, Florida.

Edited by Amanda Firestone and Leisa A. Clark

The Perils of Performance: Performing the Politics of Respectability as Resistance in Get Out (Alisha Menzies) 33

He Did Nazi That Coming: Remix, Resistance and Richard Spencer’s Face (Jason Buel and Kristi Kouchakji) 47

“A society on the verge of a nervous breakdown”: The Death of Stalin, Historical Film and Resistance to Trump’s America (Sabrina Mittermeier) 59

Section II: “The only way to support a revolution is to make your own” (Amanda Firestone) 69

The Trial of King Killmonger: Theorizing the Rage of a Third Culture Kid as Resistance (Kwasu David Tembo) 74

Voiceless Yet Vocal: Speaking Desire in The Shape of Water (Jeana Jorgensen) 87

“Who tells your story?” The Power of Hamilton’s Fantastic ­Re-Telling of American History (Amanda K. LeBlanc) 98

“Promise me we’ll do this together”: Trauma and the Restorative Power of the Feminine in Frozen and Moana (Jessica Stanley) 110

Section III: “You celebrated the small victories, and you dreamed of the big ones to come” (Amanda Firestone) 135

“A one woman riot”: The Voice of the #ICantKeepQuiet Choir (Elizabeth J. Dickhut) 141

Documentary Agitation and Outreach: The Rhetorical Networks of Resistance in Popular Nonfiction Film (Chandra A. Maldonado) 152

“We are the spark that will light the fire”: Hope, the Cyclical Pattern of Resistance and Concrete Dystopia in Disney’s The Last Jedi (Annika Gonnermann) 186 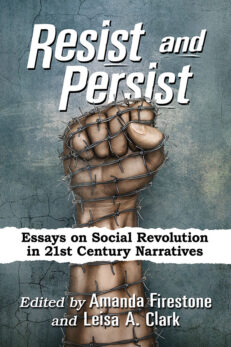