Creation, Fire, the Primordial Parents, the Nature of Evil, the Family, Universal Suffering, and Communal Obligation

Like ancient peoples the world over, the Cherokees of the southern Appalachian Mountains passed along their traditions and beliefs through stories, songs, dances, and religious and healing rituals. With the creation of Cherokee writing by Sequoyah, some of the traditions were also recorded in books. While evoking local geography and natural phenomena, the stories were also enhanced by powerful psychological and spiritual dynamics. This work examines seven myths that grew out of Cherokee culture, looking at how they emerged to explain archetypal issues. Each of the seven stories is told in full and is followed by a detailed history and analysis that provides its background, its associated rituals, and its psychological basis. One quickly discovers that while the myths are ancient, they are strikingly modern in their understanding of human personality development, family dynamics, community solidarity, and the reality of religion or spirituality. Grounded in the experience of this American Indian people and the land they inhabited, the myths tell universal truths.

“what a remarkable and innovative book this is!”—Appalachian Heritage. 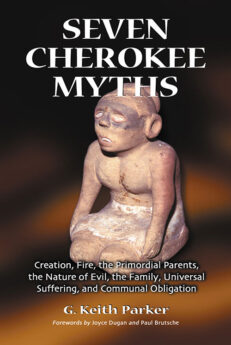