In 100 A.D., Christianity was practiced only by a small, oppressed minority. Three hundred years later, Christianity had become one of the world’s major religions. But this change did not happen easily. The imperial government of Rome, intellectual tradition and battles within the church itself influenced the transformation. Every viewpoint had its champions and opponents and whether they were “defenders of the faith” or those whom history later labeled heretics, they were part of the early evolution of Christianity. This volume discusses more than 50 figures who played a role in the transformation from primitive Christianity to early Medieval Catholicism. As it examines the lives and influence of imperial rulers such as Constantine, proponents of the intellectual tradition including Gregory of Neocaesaria and Julius Africanus, and early Bible translators such as Tatian, Origen and Jerome, the work provides a fascinating look at Christian history.

Roland H. Worth, Jr., is the author of many books. He lives in Richmond, Virginia.

“Roland H. Worth, Jr. has provided a succinct overview of the first full three centuries of Christianity…[Worth’s] approach is refreshing and commendable…his biographical format sets his book apart from the more conventional, and often dry, narrative histories…should appeal to many…this book should find a readership in academic and public libraries”—Against the Grain. 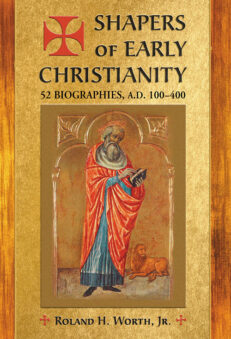 You're viewing: Shapers of Early Christianity $29.95
Add to cart