The Glory of Arthur

The Legendary King in Epic Poems of Layamon, Spenser and Blake

Only 1 left in stock (can be backordered)

Starting with William Blake’s lost painting The Ancient Britons, this book shows how the visionary artist and poet reworked the Matter of Britain—the corpus of legends presenting an alternative history of Britain—into his own mythology. He thus adds to a tradition of Arthurian epic begun by Layamon in the 13th century and continued by Edmund Spenser in the 16th, in which a Romano-Celtic warlord becomes an icon of the English imagination.

This book shows how Britain became the promised land of a pagan goddess where mythical events are as important as those of history, and how the figure of Arthur is transformed into a British Messiah whose Christian realm is in continuous interaction with the Otherworld of Faerie, an imagined place between the spiritual and the earthly. Arthur as perceived through Blake’s vision is the earthly embodiment of the fallen Albion; this exploration of the mythic underpinnings of the English sense of nationhood reveals an imaginative consciousness that links us to “human existence itself.”

Two. The Conversion of Britain   47 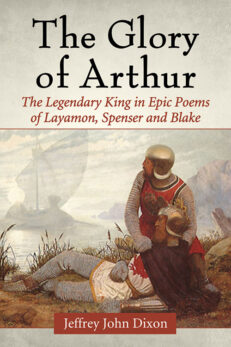