View cart “From Kathmandu to Kilimanjaro” has been added to your cart.

From Kathmandu to Kilimanjaro

Margaret (Peggy) Wilson, born in England in 1897, was the model of the new woman, serving as a medical volunteer during World War I, and later going to medical school to become a doctor of tropical diseases. In 1926, Peggy traveled to Kathmandu, and four years later married her friend from medical school who was on assignment with the British Colonial Medical Service in Tanganyika (modern-day Tanzania). Peggy and Donald spent the next 30 years working side-by-side on malaria research and public health, winning multiple awards in the process. Peggy’s daughter Sylvie, born in 1935, recalls World War II in Tanganyika and Kenya, boarding school, and university at Cambridge. After university, Sylvie returned home to teach and married a Greek Tanganyikan farmer. They welcomed independence and the nation of Tanzania, yet struggled under the impacts it had for expats. While most of the Greek community left Tanzania, Sylvie and her husband persisted on the slopes of Kilimanjaro, participating in building new Tanzania.

Margaret (Peggy) Wilson (1897-1985) was born in England and served as a physician in Nepal, Tanganyika (now Tanzania) and The Gambia, earning awards for her research on malaria.

Sylvie Wilson Emmanuel lives in Machame, Tanzania, in the shadow of Mount Kilimanjaro.

Patricia D. Beaver is emerita professor of anthropology at Appalachian State University in Boone, North Carolina. She is the author or editor of nine books and numerous articles.

A Note to Readers, by Sylvie Wilson Emmanuel viii

10. Death, Marriage and the Emmanuels: Being Greek in Tanzania, by Peggy Lovett Wilson and Sylvie Wilson Emmanuel 171

11. The 1960s in Tanganyika, Peggy to The Gambia and Magila, by Peggy Lovett Wilson and Sylvie Wilson Emmanuel 184

• “This book describes the lives of a remarkable family. It is full of global adventures, scientific discovery and the history of medicine, and detailed descriptions of life in colonial times. The book is appealing on so many levels, especially for those of us who know East Africa and its natural beauty, charms and challenges.”—John A. Bartlett, MD, professor of medicine and global health, Duke University and professor of medicine, Kilimanjaro Christian Medical University College

• “Margaret (Peggy) Wilson (1897-1985) and Sylvie Wilson Emmanuel have entrusted their journals, letters, photos, and memoir to the capable hands of Patricia D. Beaver for organization, explanation, and editing. The result is a comprehensive picture of East Africa and the British Colonial Medical Service in Tanganyika and elsewhere in the tumultuous twentieth century, through the eyes of a medical doctor and her daughter. … The book combines incredible detail—those specifics only found in daily or weekly diaries or letters, that make a piece live (the moves, the people, the England leaves, the animals, and the travel)—with the larger explanations of what was happening in the world, necessary translations and exegesis supplied by editor Beaver.”—Margaret McFadden, professor emerita, Appalachian State University 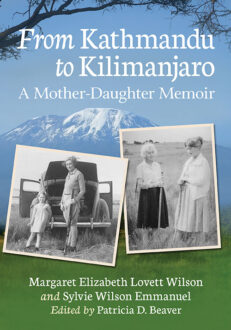 You're viewing: From Kathmandu to Kilimanjaro $39.95
Add to cart